On June 13th, outside Governor Brown’s office, members of the Mothers Out Front South Bay (San Jose) and San Francisco teams pose with their 265 “Yes on SB100” postcards for Governor Brown and their kids’ handmade signs. 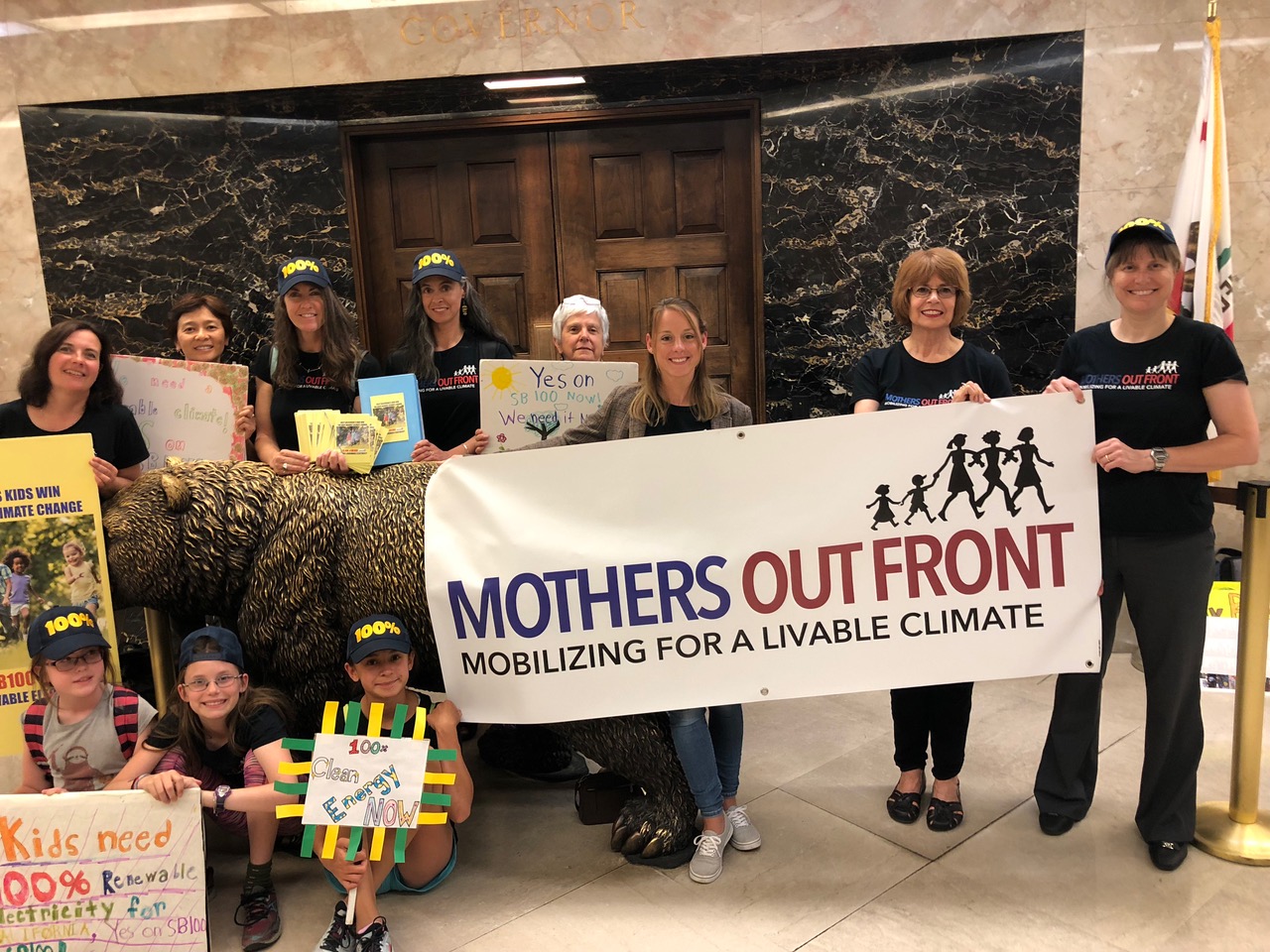 At their team meeting this weekend, members of the South Bay (San Jose, CA) Mothers Out Front team celebrated getting 655 hand-signed postcards from constituentsin favor of Senate Bill 100, the California Clean Energy Act.

You can join them on June 13th as they deliver the postcards in person to Sacramento. They're inviting parents, grandparents and children to join them as they advocate for a livable climate for all children! 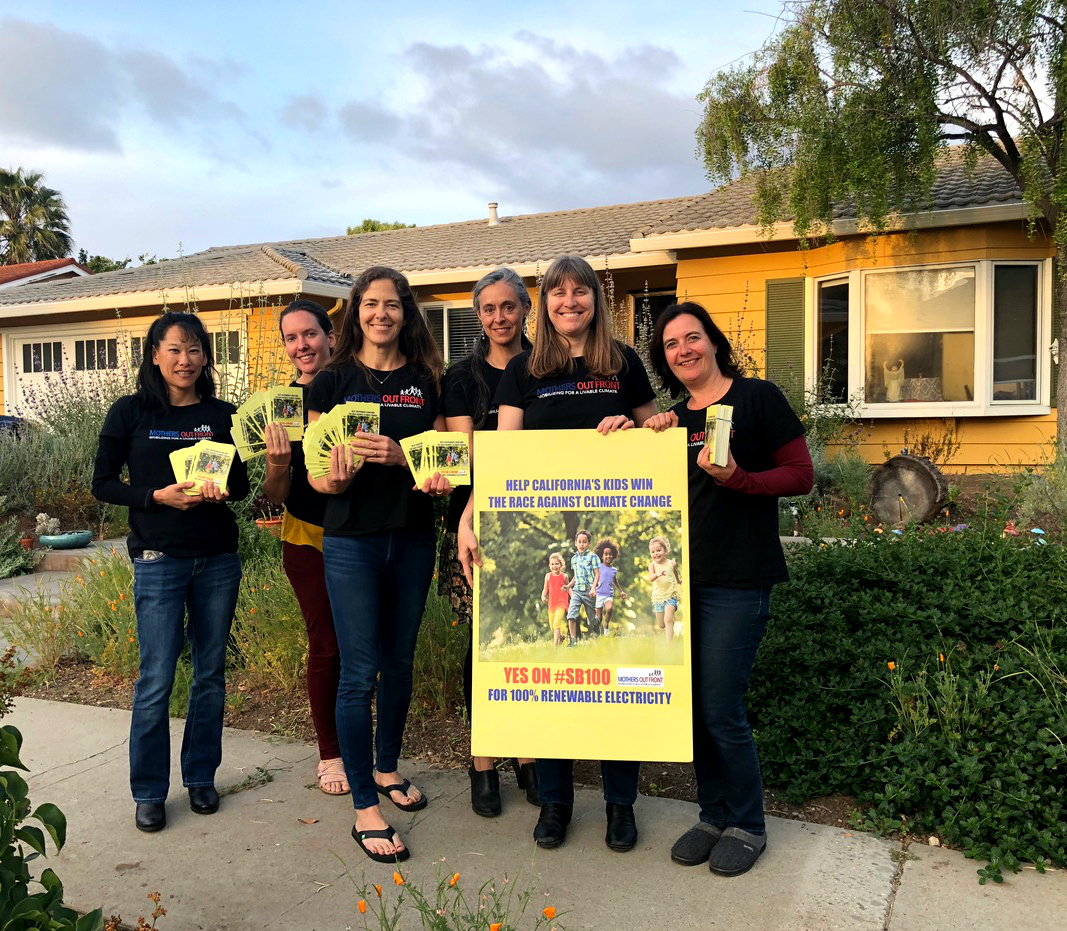 Mothers Out Front and allies from around the state called on Governor Brown to show true climate leadership, five months ahead of a Global Climate Summit in San Francisco.

The mothers pointed out that fighting for renewable energy is just 50% of the battle; the other 50% is leaving fossil fuels in the ground. CA's kids deserve 100% effort. 50% is an F!

Watch a video of the event here. (Scroll to approximately minute 18:51 for Rebecca’s & Linda’s comments.) 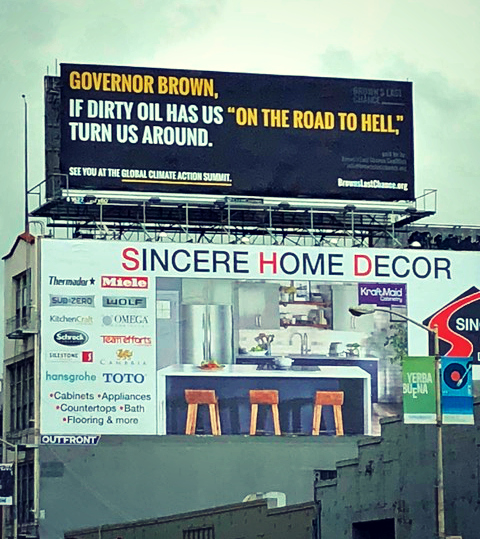 Mothers Out Front California was proud to join "more than 750 public interest groups from California and around the world" to kick off a campaign "urging Governor Jerry Brown to stop the build-out of dirty fossil fuel infrastructure, keep oil and gas in the ground, and take immediate action to protect those most vulnerable to climate change or lose their support for the global climate action summit that he will host five months from now in San Francisco."

"We, the undersigned environmental, health, justice, faith, labor, community and consumer organizations from California and around the world, strongly urge you to champion a vision for California that looks beyond the oil and gas industry to a future that is safe and healthy for everyone," the letter says."

Sixteen women, including a grandmother-daughter-granddaughter trio, attended the first-ever Mothers Out Front house party in San Francisco on Sunday. When sharing what inspired them to attend the house party, a common theme emerged: a deep commitment to social justice, and a growing realization that social justice and climate justice are deeply intertwined. Many moms also shared that they’ve been concerned about the climate crisis for quite a while, but just didn’t know what to do about it, beyond personal changes to their own lifestyles. They were excited to learn how to become “influencers,” as one guest put it, to help drive policy changes for a much bigger impact, in ways that are manageable within busy lives. 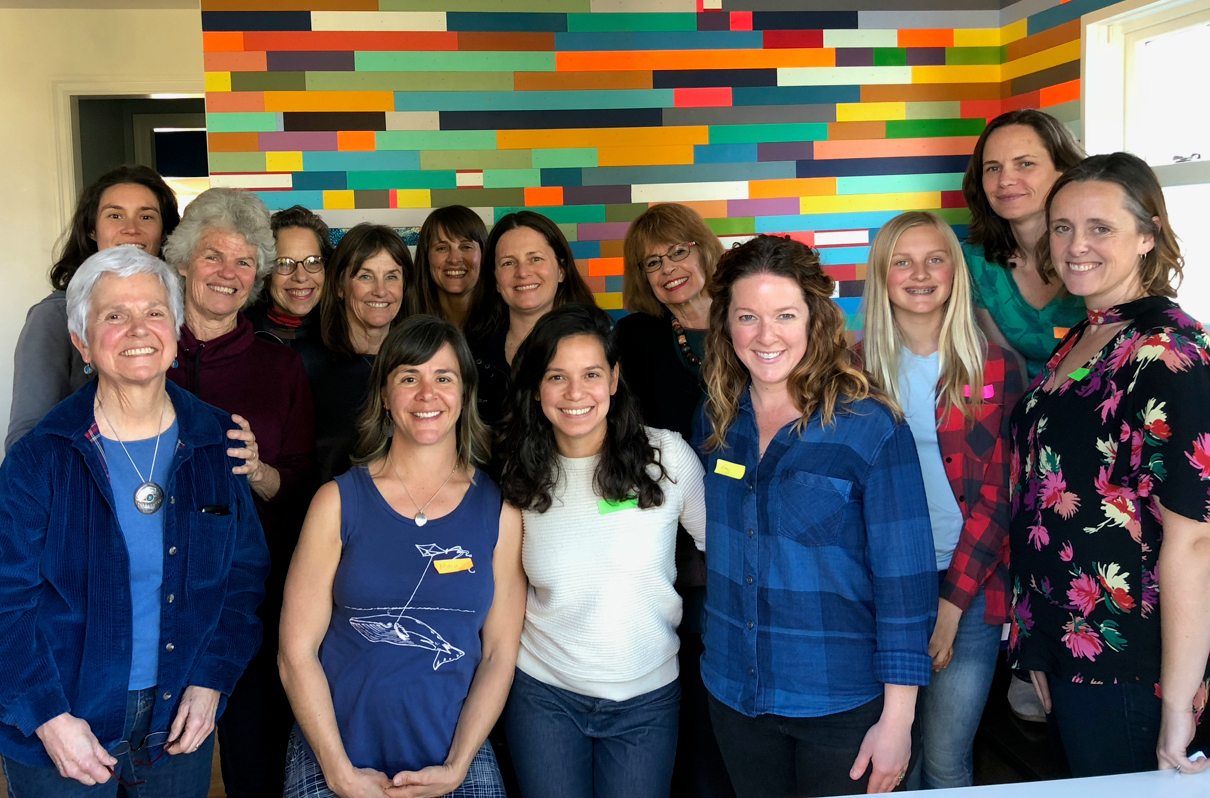 This week, Mothers Out Front South Bay gave public testimony in favor of SB 100 (the CA Clean Energy Act) at a Cupertino City Council meeting. Also speaking in favor of a city resolution supporting the bill were Tara Shreekrishnan, Krish Ellath, and three De Anza College students. After hearing our public comments, the City Council voted unanimously to express their support for SB 100, barring any hostile amendments. They also urged the bill's author, Senate Pro Tem Kevin De León, to move the target dates for zero-carbon energy even earlier, noting that Cupertino was able to transition to 100% clean energy in just one year! Come on CA, let’s go carbon-free, fast! 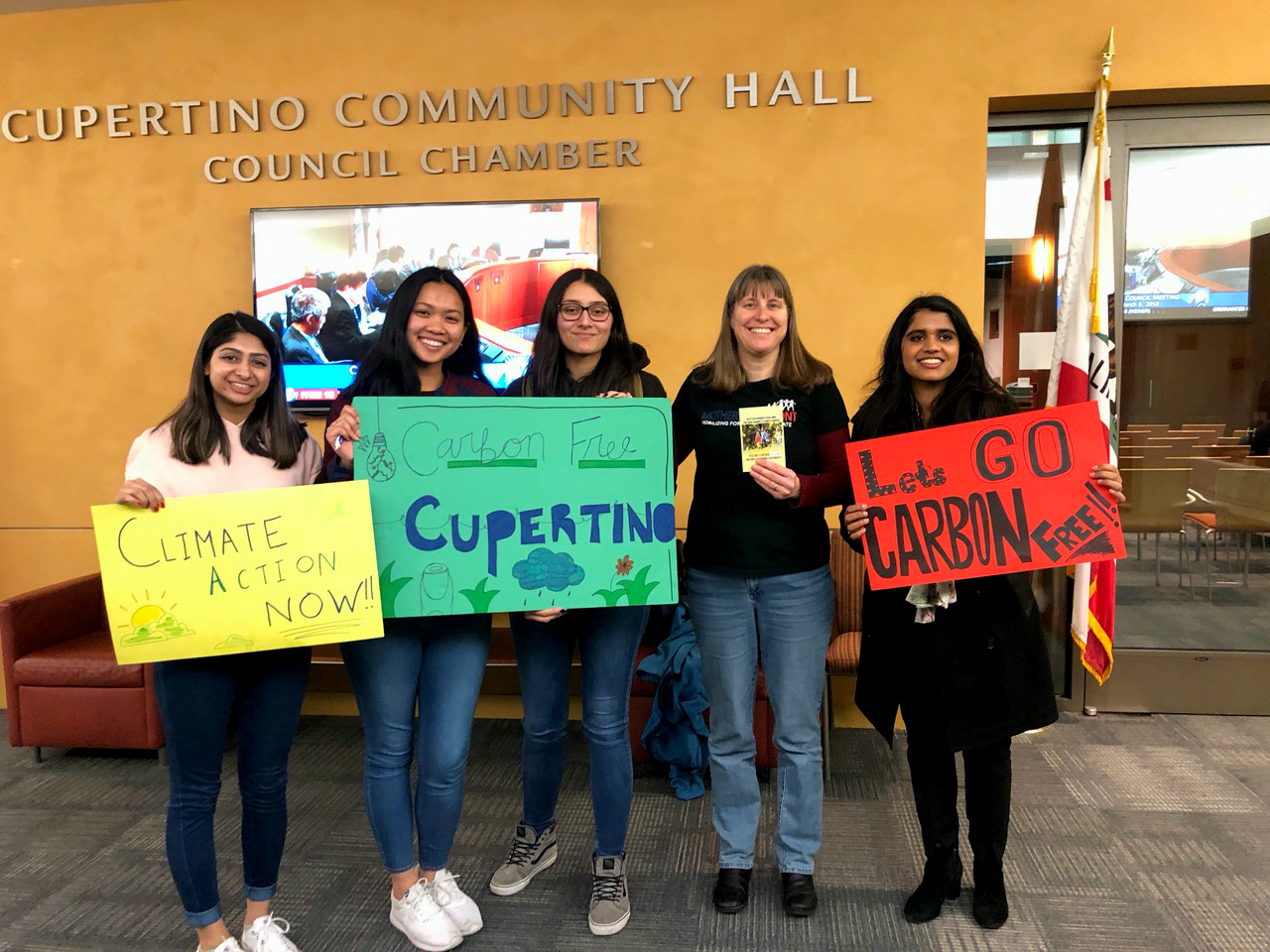 Along side San Jose Mayor Sam Liccardo, Mothers Out Front South Bay co-founder Linda Hutchins-Knowles spoke at a press conference unveiling the city’s ambitious new sustainability plan, called Climate-Smart San José.  One of just four speakers at the press conference, Linda was tapped to represent the San Jose community because of Mothers Out Front's vital role in mobilizing public support for a key component of the plan, SanJose’s new community choice energy program. Climate-Smart San José positions San Jose as one of the only major U.S. cities to release a detailed and comprehensive blueprint for how to achieve the emissions reductions goals of the Paris Climate Agreement—and in a way that seeks to uplift and enrich the entire community including those of limited economic means. 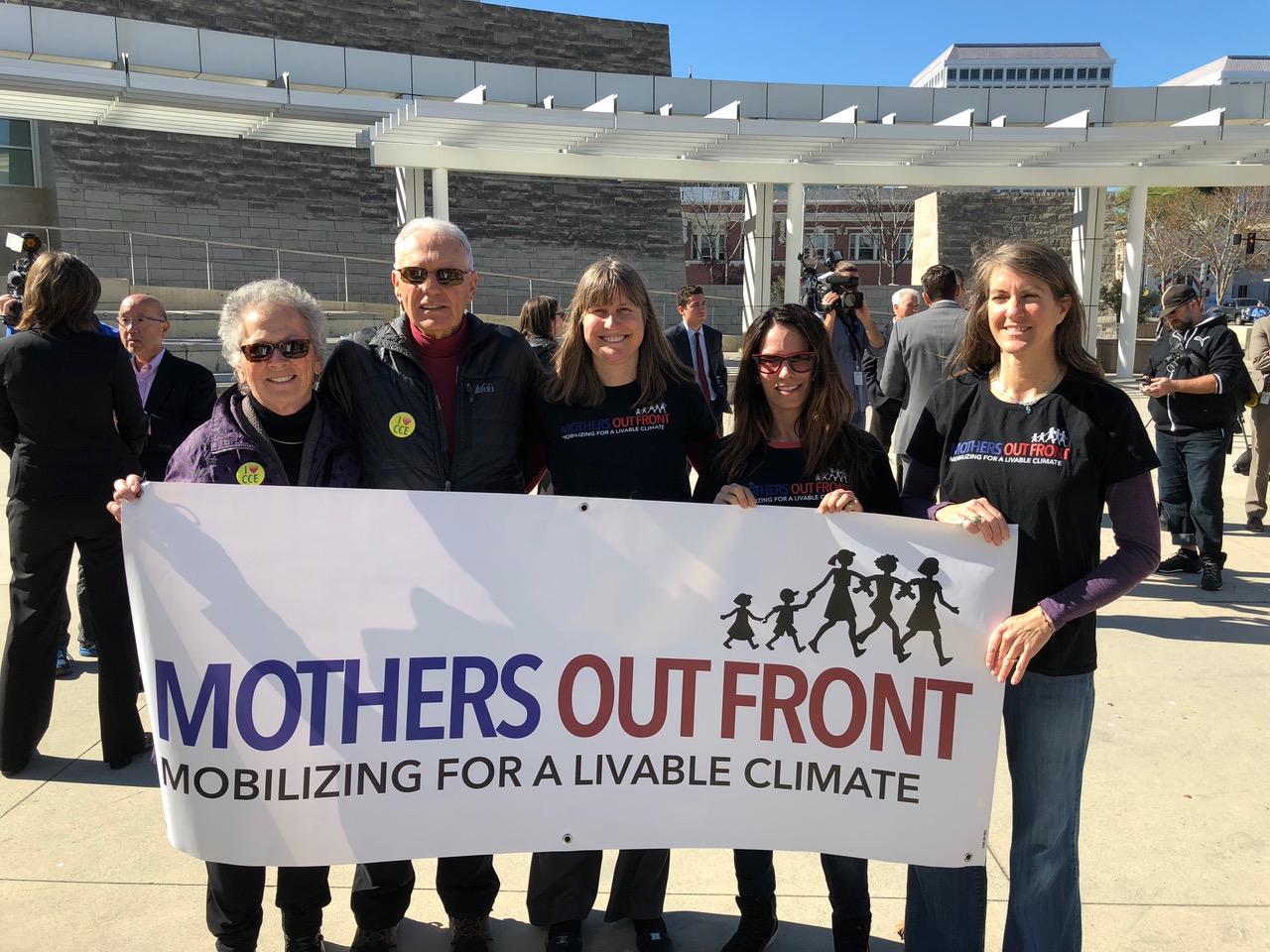 Mothers Out Front South Bay (San Jose) partnered with 350 Silicon Valley, Acterra, and the Asian Law Alliance to attract a standing-room only crowd to a town hall on climate change with local Assembly Members Evan Low and Marc Berman. The evening kicked off with the delivery, by two children, of 94 hand-signed postcards collected by the South Bay team asking these Assembly Members to support SB 100, the California Clean Energy Act. 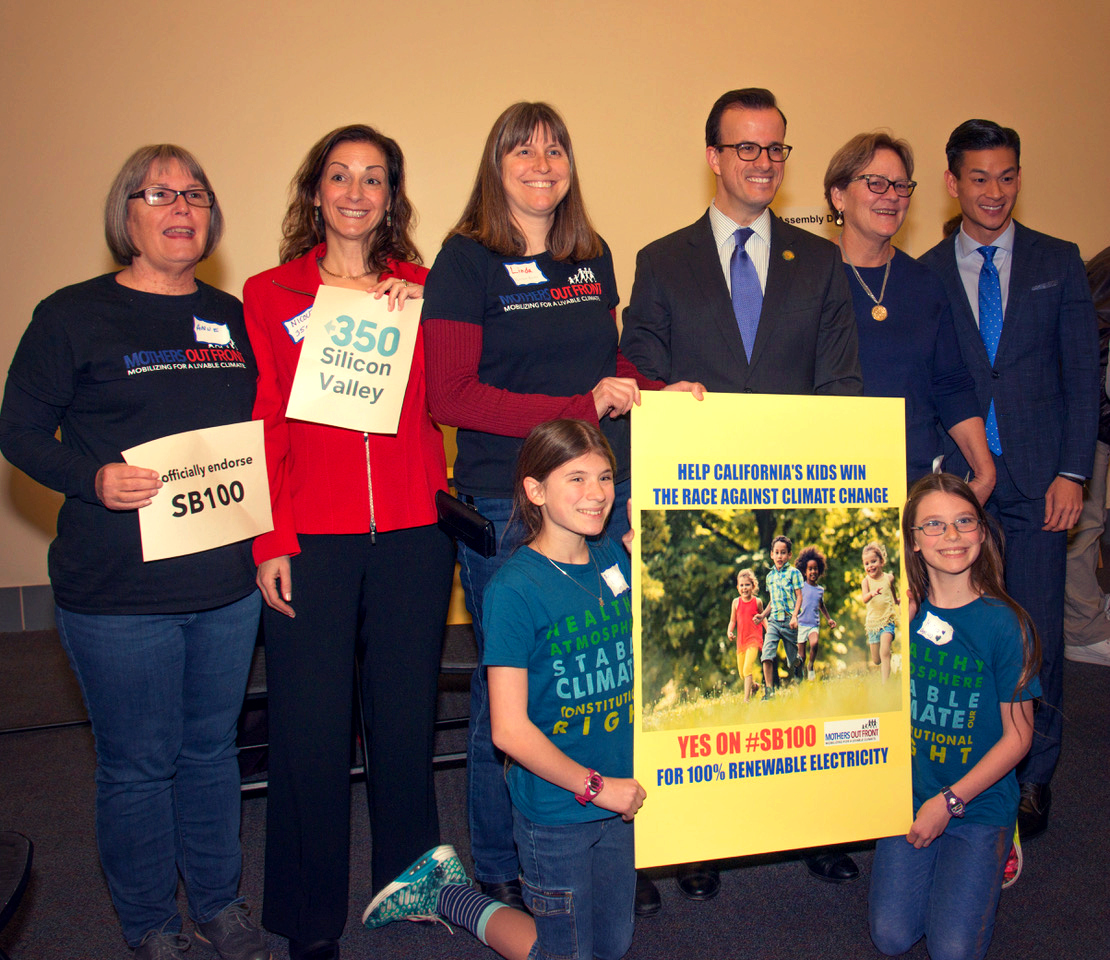 Click below to watch the 350 Silicon Valley Facebook live broadcast of the event. At about 5 minutes in, you will see Linda from Northern California Mothers Out Front and two young activists deliver their postcards at the town hall.

Six members of our San Jose team, Mothers Out Front South Bay, recently met with California Assemblymember Evan Low as part of their ongoing campaign to promote the California Clean Energy Act (SB 100). The mothers passionately conveyed their concern about increasing climate impacts, like the recent California wildfires, and asked Asm Low to prioritize ensuring a safe climate for all children.

As SB 100 gets reintroduced in January, Mothers Out Front South Bay will continue to partner with local allies like 350 Silicon Valley, 350 Bay Area, and the Sierra Club to mobilize support for its swift passage. When passed, SB 100 will accelerate California’s renewable energy targets, making the Golden State the largest economy on earth committed to getting 100% of its power from wind, solar, and other clean alternatives by 2045! (California residents, click here to show YOUR support!) 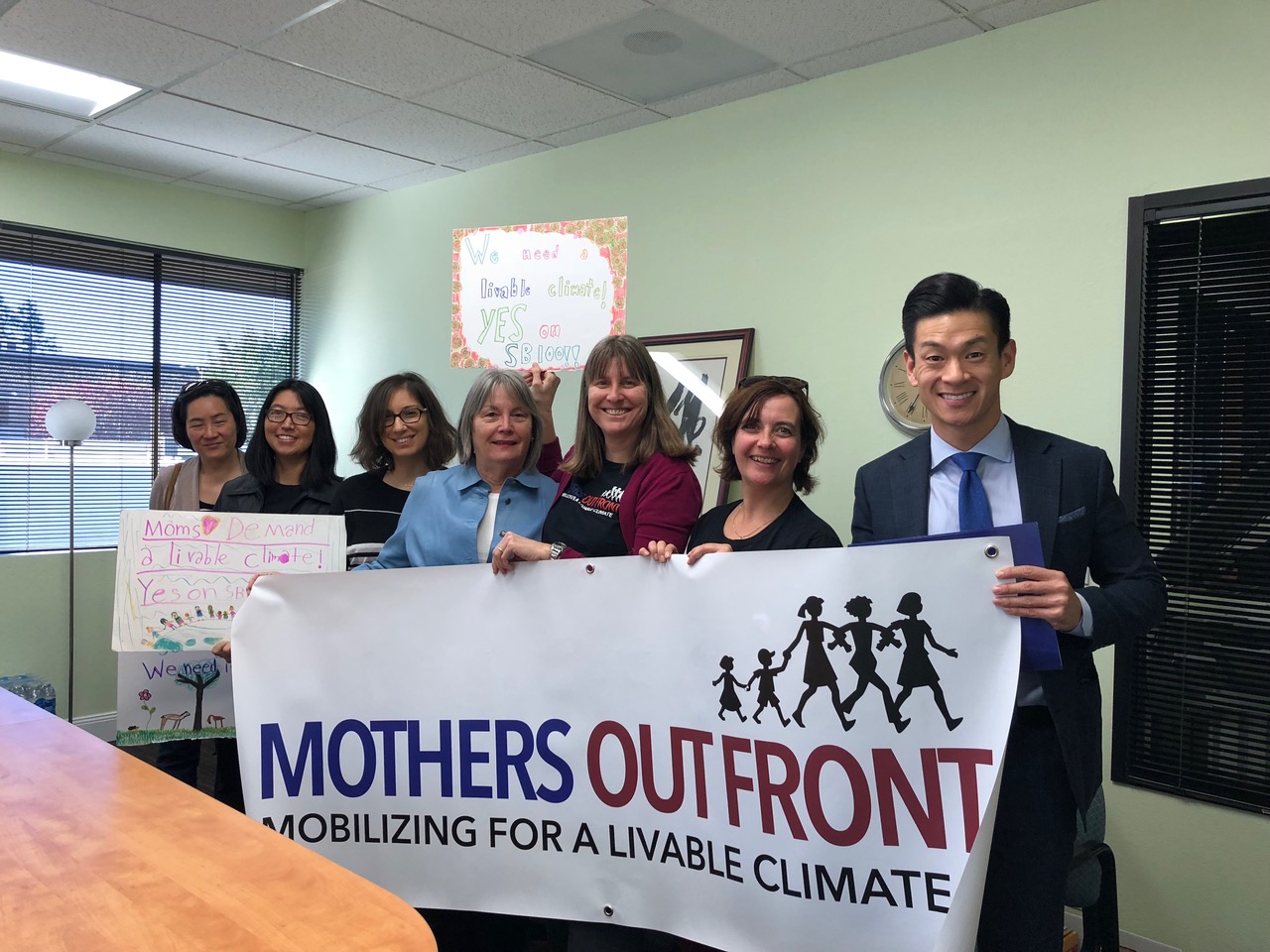 Mothers Out Front showed up to support the youth plaintiffs, ages 10-21, of Our Children’s Trust (who are suing the federal government for the right to a safe planet) as they appeared for a hearing at the 9th Circuit Court of Appeals in San Francisco on December 11.  Mothers Out Front Expansion Organizer Linda Hutchins-Knowles took the train up from San Jose to attend the rally and press conference. Afterwards, she met climate scientist James Hansen, whose granddaughter is one of the plaintiffs; Julia Olson, legal counsel for the youth; and some local mothers who are interested in starting a Mothers Out Front team in San Francisco. All are eagerly awaiting the court’s ruling. You can learn more about this historic case and watch the fascinating hour-long hearing here.  More about the San Francisco hearing and rally here.

At the press conference: